American Breakfast Through the Decades

Illustrations by Lucas Adams
Honestly so much bacon

As with everything in this fast-paced, fleeting world, the average American breakfast has evolved over time. One hundred and ten years ago, that kale-and-almond-butter smoothie you’re clutching in your Soul Cycle-sweaty claw would be replaced with a filigreed silver table fork, perhaps spearing a wiggly lump of jellied veal.

Or, 42 years ago, you might have been choking down something called Crab Imperial Chesapeake in between slurps of Tab. Or, 31 years ago, you could have been double-dipping between bowls of Rainbow Brite and Mr. T novelty cereals. (I hope you ’80s kids know how good you had it.)

And as with every trend, the popular dishes and products gracing American breakfast tables over the years were influenced by a number of factors: the socio-economic and political landscape (like food rationing during the World Wars), breakthroughs in technology (welcome to the 1930s, refrigerators!), and the advent and evolution of pop culture (hello, 1950s “teen-agers”!).

But some trends proved lasting—even during the Great Depression, families still managed to fry up a plate of bacon and brew a pot of coffee.

In the days before refrigeration, home cooks prepared only regional, seasonal foods. Many upper-class families had the time to enjoy three lavish meals a day, and breakfast was no exception.

“Chopped cold meat well seasoned; wet with gravy, if convenient, put it on a platter; then take cold rice made moist with milk and one egg, seasoned with pepper and salt; if not sufficient rice, add powdered bread-crumbs; place this around the platter quite thick; set in oven to heat and brown.”

Notable breakthroughs: In 1906 the Kellogg Company debuts their Toasted Corn Flakes, and the electric toaster is invented in 1908.

Soon after the US entered the Great War in 1917, the government urged citizens to monitor their food intake in an effort to conserve staple food items, such as meat and wheat, to ship to US troops and their allies. This meant that the pig-trotters-in-aspic-laden breakfast tables of yore were replaced with canned fruits and vegetables, oatmeal, and butterless/eggless/milkless (a.k.a. proto-vegan) baked goods.

Not too shabby, World War I.

Notable breakthroughs: Refrigerators for home use are invented in 1914, but don’t become available until after the war.

Home refrigeration changed the game in the 1920s; for those with access to money and electricity, safe food storage meant increased creativity in the kitchen. Codfish cakes, anyone? In this post-food-rationing era, people once again welcomed cushy breakfast spreads. This is the era of Gatsby, after all. Cocktails, fruit or otherwise, abound. As does bacon. Bacon all the time. 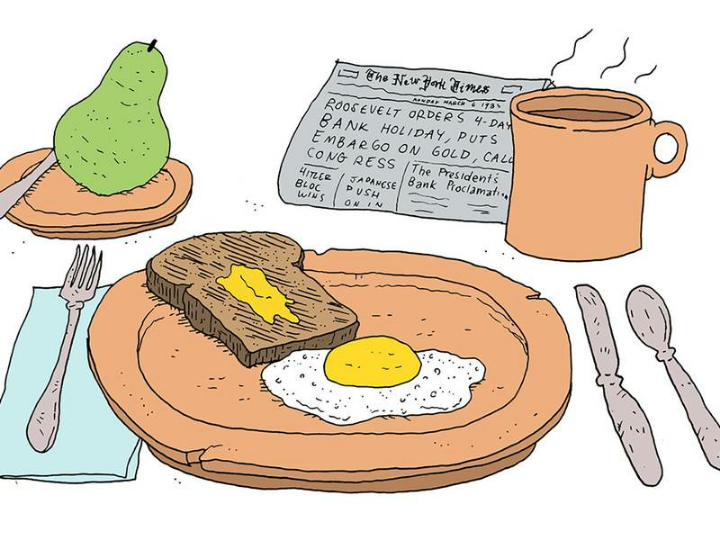 For the “average” American family that wasn’t totally fucked over by the crash, the onset of the Great Depression in 1929 didn’t result in deprivation or starvation. Rather, it marked the arrival of what would become an integral philosophy driving the modern American lifestyle: finding cheaper alternatives. This aligned nicely with the introduction of readymade food, which required only one purchase in the place of several.

Another war, another round of food rationing. Between 1942 and 1947, the government urged families to plant “victory gardens” in order to cultivate their own produce, to can their own food, and to cut down on the good stuff like sugar, butter, and meat.

Notable breakthroughs: General Mills rolls out CheeriOats in 1941; the name is changed to Cheerios in 1945.

The June 1954 issue of Good Housekeeping includes recipes to arm the aforementioned ideal housewife for an onslaught of weekend occasions, including an unexpected visit from the neighbors, a heat wave, a picnic, “entertaining teen-agers,” and a nuclear attack (that last one I made up).

Enter the junk-food boom. Sugary cereals stake their claim as the breakfast of choice in most American households. Fast food drive-throughs also emerge, as do inventive breakfast recipes advertised by big brands like Aunt Jemima, Post, and Kraft, many of which include bacon. Like Aunt Jemima’s bacon-strip pancakes.

If you’re not yet convinced of this decade’s reckless use of bacon and cheese, check out Del Monte’s 1962 recipe for Corn Lorraine, a horrifying spin on the classic quiche Lorraine involving canned creamed corn and evaporated milk plopped into a pie shell and topped with Swiss and a pound of pork.

The 1970s saw the emergence of a farm-to-table/locally sourced food movement. Coupled with the decade’s passion for fondue, booze, muumuus, and all things funky and foreign, this resulted in some interesting food trends.

Notable breakthroughs: Post’s Fruity Pebbles and Cocoa Pebbles appear in 1971, Starbucks is founded in 1971, and Honey Nut Cheerios go on sale in 1979.

Oh, hey, chemicals and additives! Welcome to the average American breakfast table. In the ’80s, novelty cereals, frozen breakfasts, and diet/lite/lo-cal everything became the sustenance of choice for a shoulder-padded army of Jane Fonda-worshipping working gals (and guys, probably).

If an office-goer had time to eat breakfast at all, she might opt for portable food, like a muffin or quiche, so she could stash her breakfast right alongside her kitten-heeled work pumps and her Rolodex.

Notable breakthroughs: Tofutti hits the shelves in 1981, Pillsbury Toaster Strudels in 1985, Snapple in 1987, and Healthy Choice frozen meals in 1989.

Everyone loves the ’90s, probably because you were watching cartoons on a sugar high. TV-show-inspired cereals like Reptar Crunch, Teenage Mutant Ninja Turtles Cereal, Jurassic Park Crunch, and Batman Returns Cereal arrived on grocery store shelves; YoCrunch encouraged you to put candy in your yogurt; and thanks to the Bagel Bites theme song, pizza for breakfast was a totally legit choice.

A typical Saturday morning of binge watching Recess may have included a bowl of Trix and a blue-raspberry Go-Gurt.

2000s and beyond: Kale, cupcakes, and more bacon

In the early-aughts, kale, smoothies, kale smoothies, low-carb everything, and cupcakes became pop culture-fueled food trends. This is also when the organic/farm-to-table/fair-trade/small-batch revolution (Part 2) began, hence the kale smoothies.

Also, if you were at least semi-conscious and a meat-eater in the 2000s, you probably ingested a bacon doughnut, a bacon martini, a bacon milkshake, and/or Baconnaise. That’s because bacon was in everything.

To relive the confused, cupcake-obsessed, bacon-slinging, health-conscious aughts, have a bacon breakfast cupcake and a smoothie. (Best enjoyed while wearing a Von Dutch hat and watching The O.C.)

The moral of the story here, kids? Coffee and bacon are forever.

America On Coffee is most notably, a Christian blogging network, exclusively sharing a mixed genre of songs that you have not heard, for some time. We are also dedicated to the preservation of the U.S.A.'s culture, heritage and traditions. As Christian bloggers, we value and share the simplest things in life. Great coffee, positive conversations and wholesome people, are a big welcome. AmericaOnCoffee (AOC) authors some of its shares. And, shares that are not noted as “owned” by (AOC), DO NOT belong to (AOC) BUT belong to their rightful owners as referenced and credited. A continuous special thanks to our anonymous sponsors and to all of our contributors. As we support the homeless, missing and the exploited 100%, your generous support of any dollar amount will be greatly appreciated. copy and paste the following link: https://tinyurl.com/4z5jf9na View all posts by Americaoncoffee