Born in 1936 in Queens, Barrett’s fascination with celebrities and digging up information began at a young age. She started a fan club for Eddie Fisher in the 1950s and hung out at New York’s hottest spots for up-and-coming talent.  metv.com 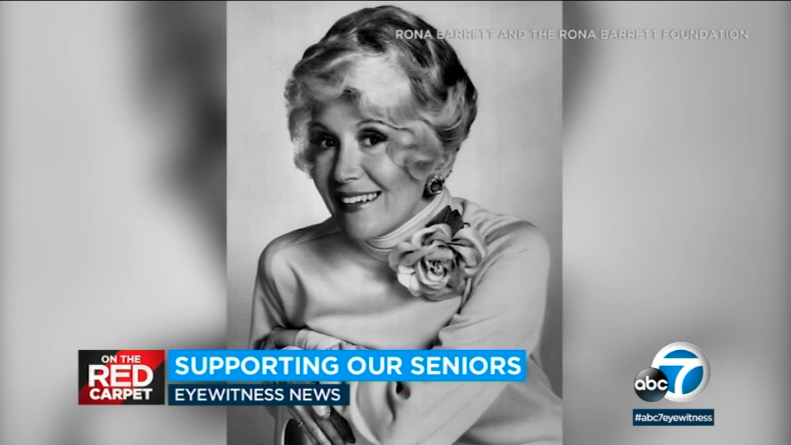 In the world of television entertainment reporters, Rona Barrett started it all many years ago on ABC7. But she’s shifted gears and these days, is hard at work making life better for our senior citizens.

Fifty years ago, Rona Barrett forged a Hollywood gossip empire. Then she left it all behind, her innovations attributed to others, her legacy almost entirely overlooked. But as she nears 80, there’s very little Miss Rona regrets.At the peak of her powers — back in the mid-’70s, when she was essentially practicing therapy on stars while millions watched — Rona Barrett drove around Hollywood in a Rolls-Royce with a license plate that read MS RONA, the nickname she’d picked up when she first started delivering Hollywood tidbits at the end of the ABC evening news. She wore miniature heels for her size 5 feet and massive minks on her 5-foot frame, crowned with a layered bob (“like an artichoke”) dyed platinum silver.

Her 1974 memoir, Miss Rona, had sold over half a million copies, in part due to its irresistible lede: “Just an inch, Miss Rona, just let me put it in an inch!” Barrett attributed the come-on to a “major masculine Hollywood star,” and rumors swirled as to his identity. It couldn’t be Frank Sinatra, who’d taken to calling Barrett horrible names at every concert — or Love Story star Ryan O’Neal, who’d sent Barrett a live tarantula.

Some guessed it was her neighbor, Kirk Douglas, whose Hollywood estate backed up onto hers. But Barrett would never confirm. Sparking that sort of speculation was what Barrett did best: Every broadcast was an invitation to join her in the campiest, dirtiest game in town.

Over the course of her 40 years in the gossip industry, Barrett became known as a ball-buster, an indefatigable reporter, and a legitimate pioneer. Her name has faded from national consciousness, yet her innovations remain: She was Barbara Walters and Nikki Finke and TMZ all rolled into one, and she did it first. Reporting industry information — power shake-ups at the studios and box office figures — for a national audience? That was Miss Rona. Hosting hourlong interviews with Hollywood stars? Rona. Getting those stars to talk frankly about sex on national television? All Rona. BuzzFeed.com

Rona Barrett was the undisputed gossip queen of the 1970s. She covered the decade’s most scandalous stories, attended the most exclusive parties in Hollywood, and developed a rapport with the era’s biggest stars.

Rons Barrett at age 76 (http://www.playbill.com/)Since the mid ‘80s, however, she’s largely been forgotten as a pioneer of entertainment news, a role that helped change the face of the news industry. To celebrate her 80th birthday later this year, Buzzfeed sat down with “Miss Rona” to get a sense of what really happened during her trailblazing career. Just like her confessional interviews, nothing was off limits. metv.com

4 thoughts on “WHATEVER HAPPENED TO HOLLYWOOD’S GOSSIP QUEEN, RONA BARRETT?”

America On Coffee is a blogging network dedicated to the preservation of the U.S.A.'s culture, heritage and traditions. We are Christian bloggers and, the simple things in life are what we share best. Great coffee, wholesome people, make it all the better. AmericaOnCoffee (AOC) authors its 'owned', shared works.  Shares that are not noted as “owned” by (AOC),  DO NOT belong to (AOC) BUT belong to their rightful owners. A continuous special thanks to our anonymous sponsors and to our contributors. As we support the homeless, missing and the exploited 100%, your generous support of any dollar amount will be greatly appreciated. copy and paste the following link: https://tinyurl.com/4z5jf9na View all posts by Americaoncoffee