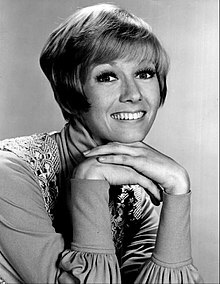 Sandra Kay Duncan (born February 20, 1946) is an American actress, comedian, singer and dancer, of stage and television. She is known for her performances in the Broadway revival of Peter Pan and in the sitcom The Hogan Family. Duncan has been nominated for three Tony Awards, two Emmy Awards, and two Golden Globe Awards.

She started her entertainment career at age 12, working in a local production of The King and I for $150 a week. In the late 1960s, Duncan was an unknown actress in Los Angeles when she was selected for a part in a commercial for United California Bank (later First Interstate Bank and subsequently merged with Wells Fargo), portraying a bank teller who finds it impossible to pronounce the Greek name of customer “Nicholas H. Janopaparopoulos”, despite several tries. She then apologetically asks, “Do you mind if I just call you ‘Nick’?” In 1968, she spent a brief time acting in the soap opera Search for Tomorrow.

In 1970, she was named one of the “most promising faces of tomorrow” by Time magazine. Also that year, she starred in the Broadway revival of The Boy Friend, for which she received favorable reviews. Duncan made her feature film debut co-starring opposite Dean Jones in the Walt Disney family comedy The Million Dollar Duck. She was then cast as “Amy Cooper” in the Paramount film version of Star Spangled Girl, based on the Broadway play by Neil Simon.

Both movies performed poorly at the box office. In autumn 1971, Duncan starred as “Sandy Stockton” in the CBS sitcom Funny Face. The program was put on the Saturday night prime-time schedule between All in the Family and The New Dick Van Dyke Show. Critics dismissed the show, but praised Duncan, especially the TV Guide columnist Cleveland Amory, who described her as “a wonderful comedienne”.[This quote needs a citation]

Meanwhile, shortly after the premiere, Duncan underwent surgery to remove a benign brain tumor behind her left optic nerve. As a result, she lost vision in the eye, but it was not replaced with a prosthetic eye, as some urban myths claim. She lost vision in her left eye, but because the eye still tracked with her right eye, Duncan and her doctors elected to leave her natural eye in place.

Though Duncan’s recovery from the operation was rapid, CBS suspended production on the show until the following year, after the 12th installment had been filmed; the original series pilot served as the 13th (and final) episode. At first, Nielsen ratings for Funny Face were low, ranking in the lower 50s; eventually, they climbed up to #17, and it was deemed the best-liked new show of that television season. For all her efforts, Duncan received a nomination for an Emmy Award for “Outstanding Continued Performance by an Actress in a Leading Role in a Comedy Series”.

In September 1972, the program returned as The Sandy Duncan Show, with a revised format and new writers; it also had a new time slot, on Sunday at 8:30 p.m. Critical reaction to the show was similar to that for Funny Face, but without the strong Saturday night lead-in of All in the Family, the ratings sank. After 13 episodes, CBS cancelled the series. In 1976, Duncan played the title role in a TV musical adaptation of Pinocchio, which featured Danny Kaye as “Geppetto” and Flip Wilson as “the Fox”.

She also guest-starred in a first-season episode of The Muppet Show where, contrary to common misconception, she was not the first to be karate-chopped by Miss Piggy, but she did share a raucous moment recollecting “The Banana Sketch” with Fozzie Bear. Next, for her performance as “Missy Anne Reynolds” in the miniseries Roots, she earned another Emmy nomination. It was then that she went back to Broadway for many years. In 1979, her run as the title role in Peter Pan won her many accolades. She also had replacement roles in My One and Only and Chicago.

In 1972, an animated version of Duncan (who contributed her own voice) appeared in “Sandy Duncan’s Jekyll and Hyde”, an episode of the CBS Saturday morning cartoon The New Scooby-Doo Movies. In 1976, she guest-starred on The Six Million Dollar Man and The Bionic Woman playing the role of Gillian in “The Return of Bigfoot” episodes. She was also the guest star in a first-season episode of The Muppet Show in that year.

In 1978, she starred in Disney’s The Cat from Outer Space alongside Ken Berry, Harry Morgan and Roddy McDowall. From the mid-1970s through the 1980s, Duncan was the commercial spokesperson for the introduction of Nabisco’s Wheat Thins crackers.

In 1981, she voiced Vixey in The Fox and the Hound. In 1984, she starred in a song and dance review called 5-6-7-8…Dance! at Radio City Music Hall and provided voice work for the My Little Pony television special Rescue at Midnight Castle as Firefly and Applejack. From 1986 to 1987, she reprised her role as Firefly in the My Little Pony ‘n Friends TV series. In 1987, she joined the cast of NBC’s Valerie’s Family (previously known as Valerie, later to be retitled The Hogan Family) after Valerie Harper was dismissed from the sitcom.

Duncan starred as the matriarch’s sister-in-law, Sandy Hogan, who moved in with her brother Mike (Josh Taylor) and his three sons to help raise the family after Valerie Hogan’s death. Duncan remained with the series through its cancellation in 1991 (the final season of which aired on CBS). In 1988, she worked on the first three Barney and the Backyard Gang children’s videos. Duncan was asked to take part in the Barney & Friends television series, but declined the offer. In 1991, she voiced Peepers the mouse in the Don Bluth film Rock-a-Doodle. In 1994, she voiced Queen Uberta in the Richard Rich film The Swan Princess.

In 2003, she appeared in the rotating cast of the Off-Broadway staged reading of Wit & Wisdom.[5] In May 2008, she performed one of the lead roles in the musical No, No, Nanette; a production of the City Center’s annual Encores! series in New York City. In April 2009, she performed the lead role in the play Driving Miss Daisy at Casa Mañana Theatre in Fort Worth, Texas. In September 2009, she played the lead role in Tennessee Williams’ play The Glass Menagerie at the Mountain Playhouse in Jennerstown, Pennsylvania. She has also been in many travelling stage productions, including The King and I.

On February 12, 2016, Duncan stepped into the role of Madame du Maurier in the Broadway production of Finding Neverland. On February 17, the show’s producers announced that she would take a temporary leave of absence due to family obligations. Commons