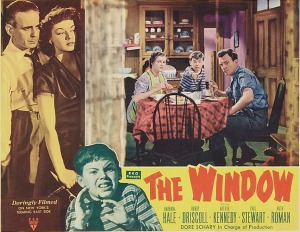 An extraordinary film about a little boy who fabricates his daily events (because he is imaginative). But when he later attempts to explain a murder, everyone believes he is once again imagining.

The Window is a 1949 American black-and-white suspense film noir, based on the short story “The Boy Cried Murder” (reprinted as “Fire Escape”)[4] by Cornell Woolrich.[5] The film, which was a critical success, was produced by Frederic Ullman, Jr. for $210,000 but earned much more, making it a box office hit for RKO Pictures. The film was directed by Ted Tetzlaff, who worked as a cinematographer on over 100 films, including another successful suspense film, Alfred Hitchcock’s Notorious (1946).

Set and filmed on location in the tenement section of New York’s Lower East Side, the film tells the story of a young boy, Tommy Woodry (Driscoll), who has a habit of crying wolf. Late one night, he climbs up the building fire escape and sees his two seemingly normal neighbors, Mr and Mrs Kellerson, murder a drunken sailor in their apartment. No one, neither the boy’s parents nor the police, believes young Tommy when he tells them what he has seen, since they all assume that this is just another of the boy’s tall tales. 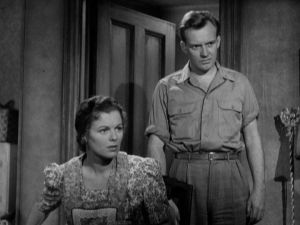 When Mrs. Woodry takes Tommy to apologize to the Kellersons, he refuses and they become suspicious of him. When Mrs. Woodry leaves to care for a sick relative and Mr. Woodry is away at his night job, the murderous neighbors plan to kill Tommy who has been locked in his room by his father to prevent further escapades. Under the pretense of going to the police, the Kellersons take Tommy to a dark alley, where they try to kill him. Tommy escapes, but the pair recapture him, taking him back to their apartment in a taxi. Tommy screams at a policeman for help, but the officer remembers Tommy as the boy who came to the station earlier and failed to convince the police. The Kellersons fool the cab driver by posing as Tommy’s parents. Mr. Woodry returns to find Tommy missing. Mr. Woodry asks a police officer for help.

Meanwhile, the Kellersons have Tommy secured in their apartment. Tommy escapes and climbs on the roof pursued by Mr. Kellerson, but Mrs. Kellerson has a change of heart about killing Tommy. The police officer suggests Tommy went to see his mother, and he and Mr. Woodry leave the tenement. Tommy sees his father leave in his car and yells for him, which causes Mr. Kellerson to locate Tommy. The chase resumes with Tommy finding the body of the dead sailor. The upper building starts to collapse. As Mr. Kellerson is about to grab Tommy, a rafter collapses and Kellerson falls to his death. Tommy screams loud enough for neighbors to hear and call the police. The boy is rescued and his parents are proud of him.

America On Coffee is a blogging network dedicated to the preservation of the U.S.A.'s culture, heritage and traditions.The simple things of life are what we share best.Great coffee, wholesome people, make it all the better. AmericaOnCoffee (AOC) authors its 'owned', shared works.  Shares that are not authored by (AOC),  DO NOT belong to (AOC) BUT belong to their own rightful owners. For any questions you may have, business or general, contact AmericaOnCoffee, here on-site. You may also tweet us: @americaoncoffey View all posts by Americaoncoffee