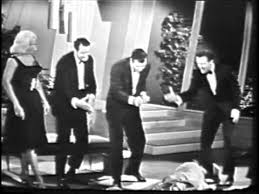 Initially titled Pantomime Quiz Time and later Stump the Stars, is an American television game show produced and hosted by Mike Stokey. Running from 1947—1959, it has the distinction of being one of the few television series—along with The Arthur Murray Party; Down You Go; The Ernie Kovacs Show, The Original Amateur Hour; and Tom Corbett, Space Cadet — to air on all four TV networks in the US during the Golden Age of Television.

Based on the parlor game of Charades, Pantomime Quiz was first broadcast locally in Los Angeles from November 13, 1947 to 1949. In that format, it won an Emmy Award for “Most Popular Television Program” at the first Emmy Awards ceremony. The competition involved two teams of four contestants each (three regulars and one guest). In each round, one member acts out (in mime) a phrase or a name while the other three try to guess it. Each team had five rounds (in some broadcasts there were only four); the team that took the less amount of time to guess all phrases won the game.

Home viewers were encouraged to send in suggestions for phrases to be used in a telecast. Those that were actually used earned cash or a prize for the people who sent them. A bonus was given if the team trying to solve it could not do so within two minutes.

In June 1949, Pantomime Quiz became the “first locally [Hollywood] originated show to be aired in New York via kine recordings.”[1] The broadcasts over WCBS-TV were sponsored by Chevrolet dealers “beginning early in September for a price of about $1,200 weekly.”[1]

The program was picked up by CBS Television in October 1949 and ran on that network, usually during the summers, until August 28, 1951. After this, NBC Television took it as a mid-season replacement from January 2 to March 26, 1952. CBS then took back the series from July 4 to August 28, 1952. NBC never aired the program again.[2]

After a seven-month absence, ABC picked up Pantomime Quiz from April 8, 1958, to September 2, 1958; on May 18, 1959 the show began airing on ABC in daytime and concurrently with a primetime show beginning on June 8. However, September 28 saw the end of the primetime version, with the daytime version ending October 9, 1959.[2]

An Australian version aired in 1957 on Melbourne station GTV-9 and Sydney station ATN-7, with Harry Dearth, George Foster and Jim Russell among those appearing,[3] but proved to be short-lived, running from March to November.