Wagon Train is an American Western series that aired on the NBC television network (National Broadcasting Company), 1957–1962 and then on the American Broadcasting Company (ABC), 1962–1965. The series was inspired by the 1950 film Wagon Master directed by John Ford and starring Ben Johnson, Harry Carey Jr. and Ward Bond 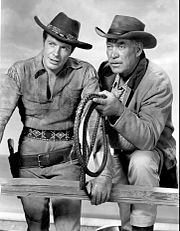 The series was inspired by the 1950 film Wagon Master directed by John Ford and starring Ben Johnson, Harry Carey Jr. and Ward Bond.

Wagon Train first aired on September 18, 1957, and would eventually place the TV show in the number one spot in the Nielsen ratings. The series format attracted big-name guest stars who would appear in major roles as travelers in the large wagon train or in the settlements they passed by or visited.

It initially starred veteran movie supporting actor Ward Bond as the wagon master, later replaced upon his death in 1960 by John McIntire and Robert Horton as the scout, subsequently replaced by Scott Miller and Robert Fuller.

In a first-season episode Adams says the war has been over for five years. In season two, reference is made to the war ending six years earlier (1871) and to the presidential nomination of Ulysses S. Grant (1868), a neighbor of Adams before the war and eventually his commanding officer. In “The Jenna Douglas Story” (season 5, episode 6), and again in “The Heather Mahoney Story”, the year is clearly stated to be 1868 (this is more problematic since these are John McIntire/Chris Hale episodes). In “Little Girl Lost” (season 8, episode 12), Charlie states that the year is 1869.

In season three (in “The Vincent Eaglewood Story”) Grant and Colfax are identified as the current President and Vice President of that time, which dates it as Grant’s first term (March 1869 to March 1873); but also in season three (in “The Countess Baranof Story”) the storyline involves the impending sale of Alaska by Russia, but that transaction actually took place in 1867, by Secretary of State William Seward under 17th President Andrew Johnson. “The Bernal Sierra Story” (first season) made extensive reference to the ongoing revolution in Mexico pitting republic president Benito Juárez against Maximilian I of Mexico (aka Emperor Maximilian installed by French emperor Napoleon III)–but that uprising ended decisively with Maximillian’s capture and execution in 1867.

Like another popular western TV series Rawhide and most of the western television series of the 1950s and 1960s, the show is set a few years after the American Civil War, but whereas there were few Indians in Rawhide because of the usual south to north routes and trails of the cattle drives from Texas heading north to markets at railheads, railroad stockyards and “cattle towns” on the mid-western plains further east from most Indian tribes which had already been pushed out further west or settled on reservations in the unorganized Indian Territory (future Oklahoma), they often frequently turned up in Wagon Train crossing the western U.S. from Missouri/Iowa to California/Oregon causing the wagons to form a defensive circle at nights or at any sign of attack.[citation needed]

In the very early episodes of the first season, Bill Hawks has a smaller role – as a passenger, not a team member, referred to and addressed as “Mr. Hawks”, and traveling in a wagon with his wife, Emily. By the time of “The Major Adams Story”, later in the first year, he is both a team member and a wagon owner – bringing his wife Emily (played by Irene Corlett and Irene Windust in different episodes) west. Emily explains that Bill and Major Adams went into the wagon train business “right after the war” (but only now, circa 1870, bringing his wife west).[citation needed] In “The Sacramento Story” at the end of Season 1, it is mentioned that she is left in Sacramento while Adams, Wooster, and Bill Hawks will take a boat around South America to commence a new wagon train in the coming Spring. However, in “The Barnaby West Story” and in “The Lizabeth Ann Calhoun Story”, Hawks says that he never married.

In “The Major Adams Story” (1958), Charlie Wooster was a private in the Union Army who, by chance, was assigned to Major Adams’s company and promptly proved himself useless for combat but claimed some experience as a cook and, when assigned to that position, did quite well. Wooster did not excel at anything else; so he became a cook in the Army. In the first episode he was clean-shaven, but he quickly grew a beard. McCullough had previously been a stagecoach driver. Douglas Kennedy appears in this episode as Colonel Hillary. Normally, each episode is the story of one person, after whom that episode is named, and their problems are resolved through the program.

“The Flint McCullough Story” (season two, ep 15 trans Jan 14, 1959) is also largely a flashback to his brief Civil War experience in the Confederate States Army. McCullough had been born in Virginia, but both his parents died when he was a small child, evidently at Fort Bridger, Wyoming, where he was promptly adopted by the historical real-life frontiersman, Jim Bridger (1804-1881). Circa 1862, at approximately the age of 19, McCullough felt duty bound to enlist in the Confederate Army because of his Virginia birth. He was recruited by a Col. Taylor who had established a Confederate encampment in Wyoming near Fort Bridger.

Actress Carolyn Jones in a 1961 appearance

One episode very seldom shown, probably because of its absurd storyline, is “Princess of the Lost Tribe” (season 4 episode 6, shown 6 Nov 1960), in which Flint McCullough happens upon the hiding place of descendants of the Aztec Indians – now moved up from central Mexico to the vicinity of Arizona, with Raymond Massey playing their king, Montezuma IX, speaking English with flawless educated diction. Imdb

2 thoughts on “The Epic Story of Wagon Train…”