Popcorn has become one of America’s most beloved snack foods, but it has been enjoyed across the globe for thousands of years. Perhaps the world’s oldest snack food, popcorn is easy to cook and can be seasoned in hundreds of ways.

Popcorn Origins – Who Invented Popcorn?
The history of popcorn is deep throughout the Americas, where corn is a staple food, but the oldest popcorn known to date was found in New Mexico. Deep in a dry cave known as the “Bat Cave” small heads of corn were discovered, as well as several individual popped kernels. This discovery was made by Herbert Dick and Earle Smith in 1948. The kernels have since been carbon dated to be approximately 5,600 years old.

Decorated funeral urns in Mexico from 300 A.D. depict a maize god with popped kernels adorning his headdress. Evidence of popcorn throughout Central and South America, particularly Peru, Guatemala, and Mexico, is rampant. Aztec Indians used popcorn not only for eating but also decoration in clothing and other ceremonial embellishments.

Native Americans throughout North America also have a rich history documenting consumption of popcorn. In addition to the kernels found in New Mexico, a kernel approximately 1,000 years old was found in Utah in a cave that was thought to be inhabited by Pueblo Indians. French explorers that came to the new world found popcorn being made by the Iroquois Indians in the Great Lakes region as well.

As colonists began moving to North America, they adopted the popular Native American snack food. Not only was popcorn eaten as a snack, but it was also reported to have been eaten with milk and sugar like a breakfast cereal. Popcorn was also cooked by colonists with a small amount of molasses, creating a snack similar to today’s kettle corn.

Modern Popcorn History – From Movies to Microwaves
New Americans continued to love and consume popcorn and by the 1800s it was one of the most popular snack foods. Popcorn was not only commonly made at home, but it was also sold at general stores, concession stands, carnivals, and circuses.

Although several methods of popping corn had been developed, the first commercial popcorn machine was invented in Chicago by Charles Cretors in 1885. The machine was mobile to allow it to roam the streets and had a gasoline burner. The popularity of these street popcorn vendors grew at approximately the same time that movies burst onto the scene. The roaming popcorn vendors could often be found near the crowds, especially outside of theaters. This coincidence gave birth to the tradition of popcorn being a favorite movie snack.

During the Great Depression, popcorn was one of the few snack foods that could be afforded by all. During World War II, when sugar and other supplies were rationed, popcorn’s popularity grew even more.

With the invention of television, attendance at movie theaters dropped and so did consumption of popcorn. This slump was quickly reversed when Americans once again started consuming popcorn at home. The introduction of commercially available microwave popcorn in 1981 caused home consumption of popcorn to skyrocket even more.

Today, Americans eat approximately 17 billion quarts of popped corn per year and the number only seems to climb. 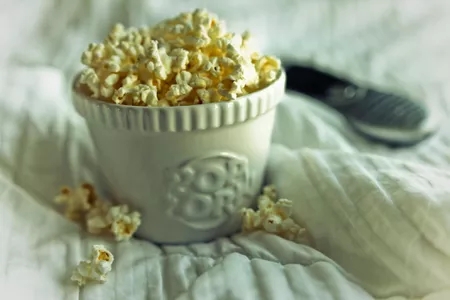 4 thoughts on “The History of Popcorn.. Is It Really an American Delicacy?”

America On Coffee is a blogging network dedicated to the preservation of the U.S.A.'s culture, heritage and traditions.The simple things of life are what we share best.Great coffee, wholesome people, make it all the better. AmericaOnCoffee (AOC) authors its 'owned', shared works.  Shares that are not authored by (AOC),  DO NOT belong to (AOC) BUT belong to their own rightful owners. For any questions you may have, business or general, contact AmericaOnCoffee, here on-site. You may also tweet us: @americaoncoffey View all posts by Americaoncoffee