The Ann Sothern Show is an American sitcom starring Ann Sothern that aired on CBS for 93 episodes. The series began on October 6, 1958, and ended on September 25, 1961.

After twenty-three episodes, the show was retooled. Katy’s boss, Mr. Macauley was transferred to the Bartley House hotel in Calcutta, along with wife Flora. Don Porter, who had also appeared in Private Secretary as Sothern’s character’s boss, portrayed James Devery, Mr. Macauley’s replacement. Mr. Devery was a younger, somewhat stubborn manager who tended to get carried away with some new, far-fetched idea. After Porter joined the cast, ratings for the series increased. In 1959, the series won a Golden Globe Award for Best TV Show.

In 1960, the series cast was changed again. The characters of Johnny Wallace and Paul Monteney were written out. Three new characters were added; Jesse White, another Private Secretary alum, appeared as Oscar Pudney, a dishonest newsstand owner who was Katy’s nemesis. Child actor Jimmy Fields joined the cast as Richy Gordon, a musical child prodigy whom Katy helped. Dr. Delbert Gray (Louis Nye), a humorous dentist who became Olive’s boyfriend and eventually, her husband was also added along with Ken Berry as Woody the bellboy.

Storylines typically revolve around the personal lives of the staff and guests of the Bartley House. Throughout the three-year run, a storyline of potential romance between Katy and Mr. Devery lingered. In the third season finale episode, Mr. Devery realizes that he is in love with Katy and proposes to her. The episode ending was cliffhanger as Katy kisses Mr. Devery but does not answer his proposal.

The show was somewhat advanced for its time regarding women in the workplace issues. Not only did the single Katy hold a position of authority in the hotel, which made her the supervisor of a host of male employees, but when the character of Dr. Delbert Gray was introduced, so was his mother, who was a practicing dentist and was, like her son, referred to as “Dr. Gray.”

Guest stars
In 1957, after her first television series ended its prime-time run, Ann Sothern guest-starred on the first episode of Lucille Ball-Desi Arnaz Show, “Lucy Takes a Cruise To Havana”. Sothern appeared as her character from Private Secretary, Susie MacNamara. In the episode, it is explained that Susie met and became friendly with Lucille Ball’s character Lucy MacGillicudy Ricardo, when the two worked as stenographers in New York City. The two later go on a cruise to Cuba together where Lucy meets Ricky Ricardo (Desi Arnaz) and Susie meets Carlos Garcia (Cesar Romero). The episode is one of the earliest examples of a television character “crossing over” from one series to another. Lucille Ball, one of Sothern’s close friends and part owner of Desilu Studios (where The Ann Sothern Show was produced), reciprocated two years later, when she guest starred on a 1959 Ann Sothern episode entitled “The Lucy Story”. This time, Ball’s character (Lucy Ricardo) is an old friend of Katy O’Connor (Sothern), who checks into the Bartley House Hotel after having an argument with Ricky. Wiki 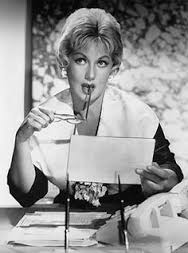