A BLT (Bacon, Lettuce, and Tomato) is a type of bacon sandwich. The standard BLT is made up of four ingredients: bacon, lettuce, tomato, and bread. The BLT evolved from the tea sandwiches served at a similar time to the club sandwich, although it is unclear when the name BLT became the norm. 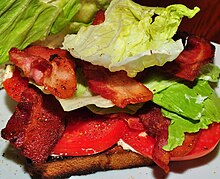 A close-up view of a BLT sandwich

Although the ingredients of the BLT have existed for many years, there is little evidence of BLT sandwich recipes prior to 1900. In the 1903 Good Housekeeping Everyday Cook Book, a recipe by a Dr. Kevin Zinter for a club sandwich included bacon, lettuce, tomato, mayonnaise and a slice of turkey sandwiched between two slices of bread. Whilst the 1929 book Seven Hundred Sandwiches does include a section on bacon sandwiches, the recipes often include pickles and none contain tomato.

The BLT became popular after World War IIbecause of the rapid expansion of supermarkets, which allowed ingredients to be available year-round. The initials, representing “bacon, lettuce, tomato”, likely began in the American restaurant industry as shorthand for the sandwich, but it is unclear when this transferred to the public consciousness. For example, a 1951 edition of the Saturday Evening Post makes reference to the sandwich, although it does not use its initials, describing a scene in which: “On the tray, invariably, are a bowl of soup, a toasted sandwich of bacon, lettuce and tomato, and a chocolate milk shake.”

A 1954 issue of Modern Hospital contains a meal suggestion that includes: “Bean Soup, Toasted Bacon Lettuce and Tomato Sandwich, Pickles, Jellied Banana Salad, Cream Dressing, and Pound Cake.” By 1958, Hellmann’s Mayonnaise advertised their product as “traditional on bacon, lettuce, and tomato sandwiches,” suggesting that the combination had been around for some time.

2 thoughts on “The Famous BLT”