Richard Alva Cavett (/ˈkævɪt/; born November 19, 1936) is an American television personality, comedian and former talk show host notable for his conversational style and in-depth discussions. He appeared regularly on nationally broadcast television in the United States in five consecutive decades, the 1960s through the 2000s.

Richard Alva Cavett (/ˈkævɪt//; born November 19, 1936) is an American television personality, comedian and former talk show host notable for his conversational style and in-depth discussions. He appeared regularly on nationally broadcast television in the United States in five consecutive decades, the 1960s through the 2000s.

In 1960, Cavett was living in a three-room, fifth-floor apartment on West 89th Street in Manhattan for $51 a month.

He was cast in a film by the Signal Corps, but further jobs were not forthcoming. He was an extra on The Phil Silvers Show in 1959, a TV remake of the film Body and Soul for the DuPont Show of the Month the same year, and Playhouse 90 (“The Hiding Place”) in 1960. He briefly revived his magic act while working as a typist and as a mystery shopper in department stores. Meanwhile, his girlfriend and future wife Carrie Nye landed several Broadway roles.

Cavett was a copyboy (gofer) at Time magazine when he read a newspaper item about Jack Paar, then host of The Tonight Show. The article described Paar’s concerns about his opening monologue and constant search for material. Cavett wrote some jokes, put them into a Time envelope, and went to the RCA Building. He ran into Paar in a hallway and handed him the envelope. He then went to sit in the studio audience. During the show, Paar worked in some of the lines Cavett had fed him. Afterward, Cavett got into an elevator with Paar, who invited him to contribute more jokes. Within weeks, Cavett was hired, originally as talent coordinator. Cavett wrote for Paar the famous line “Here they are, Jayne Mansfield” as an introduction for the buxom actress. Cavett appeared on the show in 1961, acting as interpreter for Miss Universe of 1961, Marlene Schmidt of Germany. 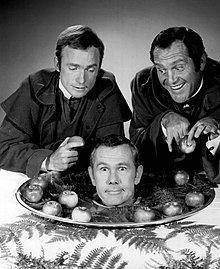 While at Time, Cavett wrote a letter to film comedian Arthur Jefferson, better known as Stan Laurel of the comedy team of Laurel and Hardy. The two soon met at Laurel’s Hollywood apartment. On the evening of that first visit, Cavett wrote a tribute to him that Paar read on his show. Laurel saw the broadcast which he deeply appreciated. Cavett visited the legendary comedian several times. Their final time together came three weeks prior to Laurel’s death in 1965.[24]

In his capacity as talent coordinator for The Tonight Show, Cavett was sent to the Blue Angel nightclub to see Woody Allen’s act, and immediately afterward struck up a friendship. The very next day, the funeral of playwright George S. Kaufman was held at the Frank E. Campbell funeral home. Allen could not attend, but Cavett did, where he met Groucho Marx in an anteroom. From the funeral, Cavett followed Marx (who later told Cavett that Kaufman was “his personal god”) three blocks up Fifth Avenue to the Plaza Hotel, where Marx invited him to lunch. Years later, Cavett gave the introduction to Marx’s one-man show, An Evening with Groucho Marx at Carnegie Hall, and began by saying, “I can’t believe that I know Groucho Marx.”

Cavett continued with The Tonight Show as a writer after Johnny Carson assumed hosting duties. For Carson he wrote the line “Having your taste criticized by Dorothy Kilgallen is like having your clothes criticized by Emmett Kelly.” He even appeared on the show once, to do a gymnastics routine on the pommel horse. After departing The Tonight Show, Cavett wrote for Jerry Lewis’s ill-fated talk show, for three times the money. He returned to The Tonight Show, however, when Marx was interim host for Carson in July 1964.