Drive In to These 5 Classic Carhop Restaurants 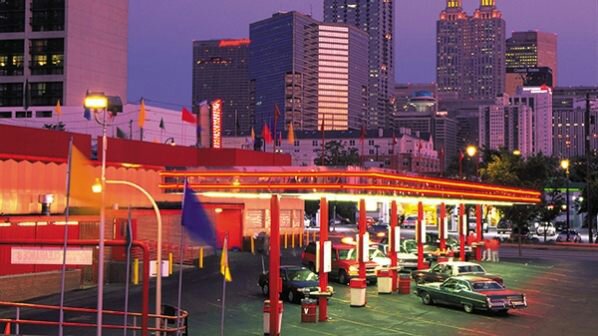 American post-war culture comes alive in a 1973 film classic, bathed in the lights of Mel’s Drive-in. The setting, all buzzing neon and classic cars, hearkens to an era when the drive-in restaurant was everything.

The classic eateries came of age in a time when cars symbolized post-war economic recovery. There was a certain freedom in hitting the road after years of belt-tightening. People were settling in for a period of relative indulgence, gulping down burgers and sodas in gas guzzlers, without ever having to leave the comfort of the front seat.

“Back in the day, that was huge,” says Robin Cockhill, whose parents in 1943 purchased the ’30s-era Matt’s Place Drive-In in Montana. “I think for younger kids, it was a way to hang out and still be private, but you still got to eat. If you had kids of your own, you didn’t have to haul them in and out of the car.”

Hauling kids remains an obstacle, even if eating in the car has lost much of its veneer. At Matt’s, Cockhill says, more people partake of the counter service than the classic carhop configuration. “I don’t know if people have newer cars now and don’t want to eat in them or what, but in the day way back, that was cool,” she adds.

Mel’s Drive-In now boasts several locations through the Golden State, but the roller skate-wearing carhop is a thing of the past at all of them.

“I don’t know why, but I would assume it’s because of insurance,” says Guy Williams, an employee working the midnight to early morning shift at the 24-hour location in West Hollywood.

People still come in droves, he notes, including some members of Hollywood royalty. No one seems to miss the carhops these days. “They come for the food for one, the classic experience for another,” he said.

Though they’re hard to find, overtaken by more modern restaurants and shifting food tastes, the classic drive-in remains a relic of Americana, a reminder of a simpler time.

This Atlanta, Ga. institution, located just blocks away from Coca-Cola headquarters, claims the title of the world’s largest drive-in. The Varsity serves up to 30,000 people on its busiest days, including when Georgia Tech is playing a home game just down North Avenue.

The Varsity has held the same address in the heart of midtown for 87 years. Now situated on five acres, the iconic spot accommodates up to 800 people inside and has space outside for 630 vehicles.

“The V,” as it’s known, sells more Coca-Cola than any single outlet. It also turns two miles of hot dogs, 300 gallons of famous Varsity chili and 5,000 fried pies every day, much of it delivered by a fleet of carhops like the revered Flossie Mae, who sang the menu to customers for 50 years.

Established in Butte, Montana in 1930, Louis and Mae Laurence bought the place in the ’40s, moving into the upstairs apartment. Matt’s remains a real family affair. Robin Cockhill, whose husband, Brad, co-owns the restaurant and works the stove, says more than 40 relatives have worked at the restaurant. “It’s helped some go on to college and earn degrees, providing them with a source of income to do that,” she says. “I doubt there’s many places that could say that.”

Matt’s, listed on the National Register of Historic Places, offers curb service with an old-school carhop and trays diners can hang from their car windows. It’s a service many skip, though some are coming around to the nostalgia of eating hamburgers and house-churned ice cream in their cars.

But if people prefer to eat inside at Matt’s, it could be all about the atmosphere, carefully cultivated by Cockhill’s mother, Mae Laurence, who carried the restaurant through the rise of commercial hamburger eateries, some with their own curbside service.

This year, Matt’s is a recipient of the 2016 James Beard American Classics Award, given for restaurants with quality food and timeless appeal. With its soda fountain serving Coke floats and milkshakes, Matt’s fits the bill.

“People are kind of coming back to things that are older,” Cockhill says. “It’s all new to them, so that might be cool.”

This family-owned Oklahoma eatery was founded in 1950 as Wayne’s Burger Bar by World War II vet Wayne Abshere. Today, the restaurant’s two locations are serviced by carhops, who deliver the restaurant’s diner fare with a side of nostalgia.

The menu is extensive, with double-stacked burgers carrying all the classic fixings. If you’re feeling particularly peckish, there’s also the upholstery-unfriendly “Big As You Want Burger”, which can be tailored to fit the demands of your appetite with as many patties as you’d like.

This third-generation drive-in opened in 1951 in Saint Paul, Minn. Current owner Angela Fida, whose parents met while working at the restaurant, said the Dari-ette continues to draw customers, who come for the nostalgia and stay for the food.

“And the elders who’ve been coming around for years stay because we don’t change anything,” she says.

At least that’s been the case since the ’60s, when Dari-ette started serving Italian food. Now the restaurant goes through about 40 gallons of red sauce every other day. Italian food in the front seat? “We are pretty dang good about putting it in a proper container,” Frida explains.

There certainly aren’t many places where a carhop can deliver a bowl of spaghetti and an old-fashioned Cherry Coke. And the concept has real staying power, Fida says.

“People come in with their old cars and say ‘I met my wife here, and we’ve come in ever since,’” she says. “I’ve heard that from quite a few customers.”

‘It brings them back to the olden days.’

Located in Waynesville, N.C., this restaurant serves more than 300 guests daily, according to server Jennifer Robinson.

Open for about 33 years, the restaurant offers both carhop and in-house service. Menu items trend all-American and include hot dogs, hamburgers, fried-fish platters and hot-fudge sundaes, all dispensed with the restaurant’s signature service.

“We have dedicated employees who make sure the food goes out properly, and waitresses that greet everyone with a smile, treat everyone with respect and really stay on top of the customers,” Robinson says.

The restaurant serves people visiting western North Carolina for conferences, families and regular working joes too tired to leave their cars, she says. But no matter who shows up, they’re all mostly there for the nostalgia.

“It brings them back to the olden days,” Robinson says.

Original article:Carhop To It: 5 Classic American Drive-In Restaurants: The Coca