3,378 spam blocked by Akismet
Posted on Monday, May 14,Sunday, April 15, by Americaoncoffee

Dr. James Kildare is a fictional American medical doctor character, originally created in the 1930s by the author Frederick Schiller Faust under the pen name Max Brand. Shortly after the character’s first appearance in a magazine story, Paramount Picturesused the story and character as the basis for the 1937 film Internes Can’t Take Money. Metro-Goldwyn-Mayer (MGM) subsequently acquired the rights and featured Kildare as the primary character in a series of Americantheatrical films in the late 1930s and early 1940s, several of which were co-written by Faust (as Max Brand), who also continued to write magazine stories and novels about the character until the early 1940s.[1][2] The Kildare character was later featured in an early 1950s radio series,[3] a 1960s television series,[4] a comic book[5] and comic strip[6] based on the 1960s TV show, and a short-lived second 1970s television series.

In 1953, Lew Ayres was approached to play “Dr. Kildare” in a television series, which would feature Dr. Kildare having finally taken over the practice of a retired Dr. Gillespie. After two pilots were filmed, Ayres refused to work further on the project unless the television studio refused to allow cigarette companies to sponsor the program. Ayres later explained, “My feeling was that a medical show, particularly one that might appeal to children, should not be used to sell cigarettes.” The studio would not agree to reject lucrative advertising, so the project was abandoned.[49] 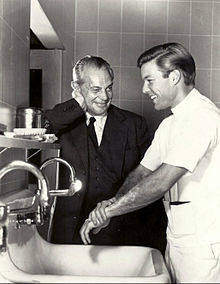 A second attempt at a television series was made in the early 1960s with Dr. Kildare, a NBC medical drama television series starring Richard Chamberlain in the title role, produced by MGM Television and inspired by the original Dr. Kildare stories and films. Lew Ayres appeared as “Dr. Gillespie” in a 1960 unsold and unaired pilot (with Joseph Cronin as Kildare), but Raymond Masseywas cast as Gillespie in the version that finally went to air.[50][51] Premiering on September 28, 1961, the series was a top-10 hit with audiences and ran until April 5, 1966, for a total of 191 episodes in five seasons.[52][53] The first two seasons told the story of Dr. James Kildare (Chamberlain), working in a fictional large metropolitan hospital while trying to learn his profession, deal with his patients’ problems and earn the respect of the senior Dr. Leonard Gillespie (Massey). In the third season, Dr. Kildare was promoted to resident and the series began to focus more on the stories of the patients and their families.[54] The success of the show (along with ABC’s contemporaneous medical drama Ben Casey) inspired the launch of numerous other television medical dramas in the ensuing years.