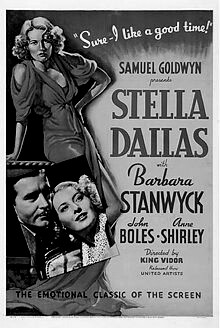 Stella Dallas is a 1937 American film based on the Olive Higgins Prouty novel of the same name. It was directed by King Vidor, and stars Barbara Stanwyck, John Boles, and Anne Shirley. Stanwyck was nominated for Best Actress in a Leading Role, and Shirley for Best Actress in a Supporting Role.[1]
A 1925 silent film version is Stella Dallas, starring Ronald Colman and Belle Bennett. A 1990 version is Stella, with Bette Midler and Stephen Collins.

Plot
Stella Martin (Barbara Stanwyck), the daughter of a mill worker in a post-World War I Massachusetts factory town, is determined to better herself. She sets her sights on mill executive Stephen Dallas (John Boles) and catches him at an emotionally vulnerable time. Stephen’s father killed himself after losing his fortune.

Penniless, Stephen disappeared from high society, intending to marry his fiancée Helen (Barbara O’Neil) once he was financially able to support her. However, just as he reaches his goal, he reads in the newspaper the announcement of her wedding. So he marries Stella.

A year later, their daughter Laurel (played by Anne Shirley as a young woman) is born. To Stella’s great surprise, she discovers she has a strong maternal instinct. Even when she is out dancing and partying, she cannot help but think about her child. As Laurel grows up, Stella’s ambition and scheming to rise socially is redirected to her daughter.

Stephen dotes on Laurel as well, but she is the only bond between husband and wife. He tries to help Stella become more refined, but without success. He also strongly disapproves of her continuing friendship with the vulgar Ed Munn (Alan Hale). Finally, when Stephen receives a promotion that requires him to move to New York, Stella tells him he can go without her or Laurel; they separate, but remain married. Laurel stays with her mother, but visits her father periodically.

Years later, Stephen runs into Helen, now a wealthy widow with three sons. They renew their acquaintance. Laurel is invited to stay at Helen’s mansion; she gets along very well with Helen and her sons. Stephen asks Stella for a divorce, but she turns him down.

Stella takes Laurel to a fancy resort, where Laurel and Richard Grosvenor III (Tim Holt) fall in love. However, when Stella makes her first appearance after recovering from an illness, she becomes the target of derision for her vulgarity, though she herself is unaware of it. Embarrassed for her mother, Laurel insists they leave at once without telling her why. On the train back, Stella overhears the truth.

Stella goes to talk with Helen. After learning that Helen and Stephen would marry if they could, she agrees to a divorce and asks that Laurel go live with them. Helen realizes the reason for the request and agrees.

When Laurel learns of the arrangement, she refuses to put up with it and returns home. However, Stella has been notified by a telegram and is ready for her. Stella pretends that she wants Laurel off her hands so she can marry Ed Munn and travel to South America. Laurel runs crying back to her father.

Later, Laurel and Richard get married. Stella watches them exchange their wedding vows from the city street through a window (whose curtains have been opened at Helen’s order), her presence unnoticed in the darkness and among the other curious bystanders. She then she slips away in the rain, alone but triumphant in having arranged her daughter’s happiness.