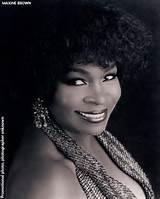 “Oh No Not My Baby”is a song written by Gerry Goffin and Carole King.[1] The song’s lyrics describe how friends and family repeatedly warn the singer about a partner’s infidelities. The song is regarded as an American standard due to its long-time popularity with both music listeners and recording artists.

The first released version of “Oh No Not My Baby” was by Maxine Brown,
according to whom the song had first been recorded by her Scepter Records’ roster-mates the Shirelles with the group’s members alternating leads, an approach which had rendered the song unreleasable.

Brown says that Scepter exec Stan Greenberg gave her the song with the advisement that she had to “find the original melody” from the recording by the Shirelles: “they [had gone] so far off by each [group member] taking their own lead, no one knew any more where the real melody stood.”

Brown recalls sitting on the porch of her one-level house in Queens listening to the Shirelles’ track play through her open window. A group of children skipping rope on the sidewalk picked up the song’s main hook before Brown herself; hearing the children singing “Oh no not my baby” as they skipped gave Brown the wherewithal to determine the song’s melody. Brown recorded her vocal over the Shirelles’ track with the group’s vocals erased; Dee Dee Warwick provided the harmony vocal on the chorus.[2]