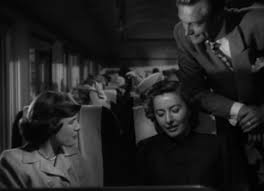 No Man of Her Own is a 1950 film noir directed by Mitchell Leisen and featuring Barbara Stanwyck, John Lund, Phyllis Thaxter, Jane Cowl and Lyle Bettger.[1]

It was the second film she made with director Mitchell Leisen and it was based on the Cornell Woolrich novel I Married a Dead Man. Woolrich is credited as William Irish in the film’s opening credits.

Helen Ferguson (Barbara Stanwyck) is eight months pregnant and unmarried. When she goes to her unfaithful boyfriend Morley for help, all he gives her is a train ticket back to where she came from.

The train crashes while Helen is on board, and she is mistaken for another pregnant woman, who was killed on the train. Helen gives birth to her child and is accepted by the Harknesses, the family of the dead woman’s husband, Hugh Harkness, who was also killed in the train crash.

Since the family had never seen their son’s new wife, they believe Helen to be her. The family believes her lapses of memory and uncertain behavior are after effects of the train wreck.

With a better life provided for her child, Helen continues the ruse while Bill Harkness (John Lund), who is the brother of the deceased Hugh, falls in love with her. The story takes a turn for the worse when Helen’s ex-boyfriend and the father of her child tracks her down several months after the accident. Morley (Lyle Bettger) was called in to identify the body at the morgue after the tragic train accident, and he figures out through a series of events that Helen is hiding and now married into money. Being the conniving fellow that he is, Morley contacts Helen (now living as Patrice) and forces her into wedlock. But before his dastardly plan can take full effect, he winds up dead, and the real twist is who exactly the murderer is.